I came to England a year ago from Sri Lanka. When I arrived in London I discovered the job I had been promised did not exist. My English was not so good then and I found it impossible to get any work. I was more and more desperate. My wife and son were waiting for me to send money to them and I was too ashamed to tell them the truth.

I was sleeping in a supermarket car park and buying alcohol with the little money I had. I was in a bad way when the Blenheim outreach team found me. They came everyday for a week to check on me and try to get me to come to the project. Eventually I agreed. At this time I was in A&E nearly every week because of my drinking. I had cirrhosis and regular seizures. I also had a really bad rash all over my body but I was too embarrassed to go to a doctor or show them in A&E.

Blenheim were so patient with me. They organised for a Sri Lankan nurse to assess me so I could really understand how sick I was and what I needed to do. I started to go to the alcohol breakfast club and they got me officially registered as a rough sleeper so that I could get housing support too.

I am now in a temporary B&B and registered with a G.P. Everyday I go to the Blenheim breakfast and lunch club as part of my alcohol reduction plan.

I am getting stronger each day and haven’t had a seizure for a few months now.

I think it won’t be long before I will be able to contact my wife and son again.

Somehow in all the chaos I kept my appointments and of course it wasn’t long before I was referred for specialist help. Blenheim was one of those organisations. That was two years ago. I am now the very happy mum of two beautiful girls. Two beautiful, healthy girls. I don’t believe in miracles but I do believe in Blenheim.

Jerome is not my real name. There hasn’t been very much that’s real about me in my life, until recently.

I was the envy of my friends when I landed a dream job in London as a stylist for the stars. I was on Breakfast TV when I was just 18 for winning an award for young stylist of the year. Most of my work was for pop stars and the drugs and insane parties came with the job. When I’d leave home for work in the morning I’d never know when I’d be back, sometimes it was days later and I would struggle to remember what had happened and sometimes I would remember and choose to forget. My life had become a blur. I managed to juggle this chaos for 6 years.

It was at a party when I had a severe attack of anxiety and paranoia. I guess it was then that I finally admitted to myself that I was vulnerable, afraid and not in control and the first time that I allowed myself to accept that I didn’t know who I was anymore and whoever I was, was desperate and lonely.

Funny to think that when I eventually lost my job was when I started to feel that I had a chance to get my life back. Mum took me in on the condition that I got help. That’s when I found Blenheim and Blenheim helped me to find me and a confidence without the help of a drug.

My baby was fighting for her life in intensive care and there was nothing that I could do for her. I wasn’t even allowed to see her. I had been arrested and charged with child neglect. By doing what I thought was the best thing for her I was in fact slowly killing her. Cocaine was found in her bloodstream through my breast-feeding. So began the longest darkness where I felt that my life was no longer my own.

My other two kids were taken away and eventually placed in my mum’s custody. At least I could visit them but never unaccompanied, which broke my heart. I had to quit my job to attend the child safeguarding meetings, court hearings and key work sessions.

At first I was very resistant to Blenheim’s support, I had lost all respect for the professional services. The turning point was when my key worker said, “you are the author of any reports that I will make”. I instantly felt like I had been handed back my life and I knew that however hard it was going to be, I was going to get my kids back. There was nothing else that mattered.

It took a long, long time but I didn’t give up for a single second. I pleaded guilty to child neglect and was given a two year suspended sentence. We are back as a family now. We have all lost out from those years of separation but everyday we do something special together to make up for it.

Today, I am a peer mentor at Blenheim and I have just passed my Diploma in Health and Social Care. I don’t know what the future holds but I do know one thing for sure, I am going to keep telling my story, especially to those young mothers, who like me maybe don’t understand how easy it is to harm those that you would die for. 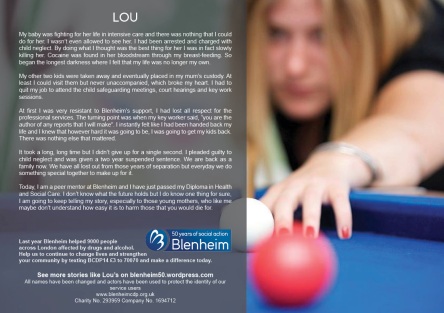